The Mental Disorders that gave us Modern Architecture

The Mental Disorders that Gave Us Modern Architecture

How did modern architecture happen? How did we evolve so quickly from architecture that had ornament and detail, to buildings that were often blank and devoid of detail? Why did the look and feel of buildings shift so dramatically in the early 20th century? History holds that modernism was the idealistic impulse that emerged out of the physical, moral and spiritual wreckage of the First World War. While there were other factors at work as well, this explanation, though undoubtedly true, tells an incomplete picture.

Recent advances in neuroscience point to another important factor: one reason modern architecture looked so different than past constructions was because its key 20th century founders literally didn’t see the world in a “typical” fashion. They couldn’t. Their brains had been either physically altered by the trauma of war or, like Le Corbusier, they had a genetic brain disorder. And while their recommendations for “good design”—a new world, a clean slate—certainly reflected their talent, ambition, and drive, their remedies also reflected their brains’ specific disorders.

Eye tracking people with autism can help us understand why Le Corbusier remained blind to others’ views—he literally couldn’t process visual stimuli normally. And the autism diagnosis can also help us better understand why his architecture turned out the way it did. This is quite important. For it turns out people on the spectrum often struggle not only with social relations but with visual overload referred to as hyperarousal. So, no surprise, then, that Le Corbusier would streamline Villa Savoye, built near Paris in the early 1930s (above, at left), to the point it suggests a box on stilts rather than what it was: a wealthy couple’s country retreat. No wonder his National Museum of Western Art in Tokyo, Japan, completed some two decades later (at right) would feature so much blank concrete. Le Corbusier’s designs are a likely response to his atypical brain; he was striving to limit stimulation, wrestling to calm a brain abuzz.

Gropius’s war experiences were particularly horrific; seriously wounded on the Western Front, he also survived a plane flight where the pilot had been shot dead. So, when he built his own home in a Boston suburb, (in Lincoln, MA, 1938) two decades later, and three thousand miles away from where he saw military action, he put the building on a remote hilltop far from the street. Its front façade and overall form suggest a concrete pill box or duck blind, complete with flat roof, hidden door and slit windows, the better to shoot from. His home office has a front window with a sill more than four feet off the floor—no one could possibly see him inside from outside and he could only see out when standing up (not unlike a WWI trench). The brain of a war veteran may forever mix past with present, struggling to find safety ever after; the terrorized subcortical parts of his brain, stuck at the Front, directing every move of the design.

Why should it matter that the people who gave us modern architecture in the 20th century had traumatic brain damage and disorders? For one, the information reframes our understanding of how modern architecture came to be. We can now better understand, at least in part, why modern buildings look so different than older or traditional ones: relationally-compromised people with atypical “fixations” and emotional regulation came up with the architectural approach, abetted by a wounded world rushing to bury the past and an economic power structure all-too-willing to profit from it.
Click to expand...

Fascinating article exploring the origins of modernist architecture. IMO while it makes good points it still feels a bit too explanatory for me to take it without a grain of salt.

How Autism helped make it? Interesting somewhat given the fact I know several autists along with myself who loathe modern architecture on the basis it holds no meaning or importance. It's bland and hard on the eyes. Though, this article might indicate me and them being outliers to this.

Erwin_Pommel said:
How Autism helped make it? Interesting somewhat given the fact I know several autists along with myself who loathe modern architecture on the basis it holds no meaning or importance. It's bland and hard on the eyes. Though, this article might indicate me and them being outliers to this.
Click to expand...

You're not alone there.

But, might there be something to this? I guess it's possible, but I would want more evidence to back up the assertion that modern architecture is the product of autism than one autistic architect and a picture showing where autistic people look. Maybe in the case of Le Corbusier, his autism lead him to design in a certain way and the ideologues latched onto that. I'm not sure, but I feel like blaming autistic people for modern architecture is being to mean to them.

On a related note, I can't believe that they let Le Corbusier design churches. 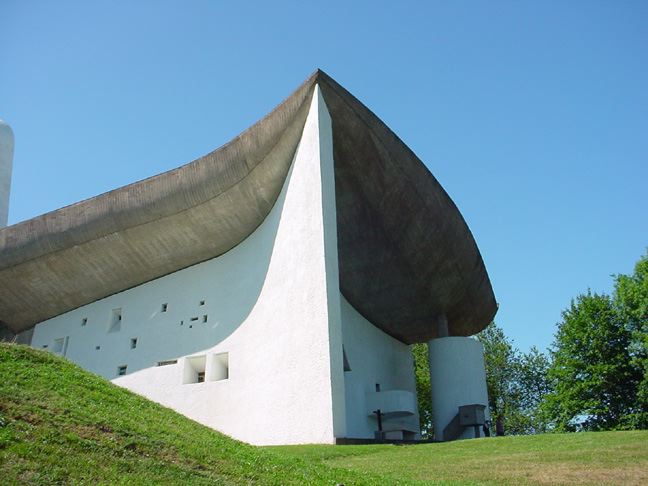 And this convent, it looks like a super-max prison.

That middle one looks like it belongs on a vent.

It looks like a giant kitchen appliance to me.

Depends on which angle for me with that, from the left it looks like an oven of sorts, from up top a knife holder, from the side an escalator, a bit of 2D Mario with those outcroppings near the bottom and a... Capri-Sun...? If I focus on that yellow tube.

The normal-looking apartment blocks in the corner just make this building worse to look at though, as if it was designed to be an eyecatcher but the designer forgot the difference between awe and confusion when they made it.

The comment on the apartment blocks also annoys me now, as I have now figured out what the bottom pic reminds me of, apartment blocks I pass by when I take the bus to the shopping centre in town for a McMuffin before going to the Warhammer shop. It irks me the wrong way as it shows so much contempt for what a church/religious institution should be... It's so dull, a "church" is a place of reverence yet there is nothing to revere... There is no respect for what it allows people to "speak" to, it's just there as a dollop of someones smug-laced ego.

Erwin_Pommel said:
Depends on which angle for me with that, from the left it looks like an oven of sorts, from up top a knife holder, from the side an escalator, a bit of 2D Mario with those outcroppings near the bottom and a... Capri-Sun...? If I focus on that yellow tube.
Click to expand...

More like a cross between a toaster and a knife holder to me.

I also think it's excessively cute. I mean, I have made detailed posts here explaining how one of the unsung horrors of modern leftism is Urban Planning, and conservatives need to be much more concerned about urban planning and its conceits and developments to understand why the modern world is what it is--but I don't think that modern architecture was the result of mental disease. I think it's the result of abandoning God, of atheism, of communism. Corbusier designed buildings in accordance with his beliefs as a communist. They reflect a disordered worldview which does not promote divine aesthetics. Autism doesn't factor into it.

Tyanna of Pentos said:
I think it's the result of abandoning God,
Click to expand...

Normally I'd disagree about bringing religion into things, but here it makes sense from what I've seen as with the loss of a faithful populace buildings as a whole don't seem to try and be impressive, like, faithful peoples gave us Notre Dame, the Hagia Sophia, the Colossus of Rhodes, the Statue of Zeus, the Great Pyramids of Giza and so on, while increasingly faithless ones gave us this. Now, unless there is some other reason that I am missing like a sudden change in priorities when designing buildings or just cultural and technical knowledge mingling diluting the uniqueness of buildings.

Makes me kind of sad tbh, seeing that most of our greatest architectural endeavours for the past few years have just been skyscrapers or giant names in the Arabian sands. Though, that might mean we do buildings better when they're to honour something rather than show off the economic capacity of a single individual.

SergeantBrother said:
On a related note, I can't believe that they let Le Corbusier design churches.

No seriously? What denomination is that?

Scottty said:
No seriously? What denomination is that?
Click to expand...

Just having to worship in that place would convert me to Eastern Orthodox Christianity...

Scottty said:
No seriously? What denomination is that?
Click to expand...

It was designed to be a Catholic Church, but currently the French government uses it as some kind of culture center.

I should have expected that really

There's no glory to it, nothing to take pride in, to point at and make people take time to really examine and admire a building. Where I live there are still a lot of 18th and 19th century buildings put up in the Industrial Revolution and despite them being built fast and functional they still carry a lot of carvings and detail.

Lot of modern buildings are about gimmicks and those get boring very fast. There is very little that is admirable about them, in some cases you can respect the engineering that has gone into them but they are basically disposable throw away structures no one will truly remember.

Some have artistry, but when even the most basic office used to have sculptures and carvings our urban environment is diminished by being so bland, and if the world around you is bleak it can't be good for the heart

How certain are you that that isn't for people waiting for a Martian? Because it looks like a space cult's headquarters.

DarthOne said:
Just having to worship in that place would convert me to Eastern Orthodox Christianity...
Click to expand... 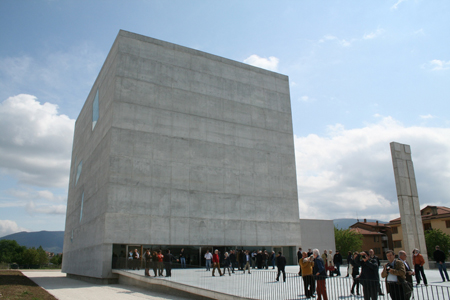 At least the other one has details.

Navarro said:
There are worse:

At least the other one has details.
Click to expand...

I'm an atheist and even I think that these things are blasphemous.

SergeantBrother said:
I'm an atheist and even I think that these things are blasphemous.
Click to expand...